The Most Amazing Book In the Face of Existence

Find this review and more at http://www.thereadingobsession.blogspot.com

Seventy-Thousand-Billion Stars out of Five Stars

This is the cover of one of the most brilliant and hilarious books of our time. 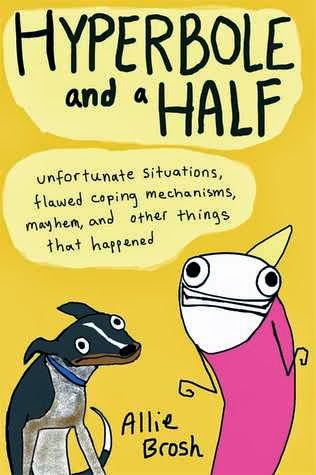 This is what the summary says:

This is a book I wrote. Because I wrote it, I had to figure out what to put on the back cover to explain what it is. I tried to write a long, third-person summary that would imply how great the book is and also sound vaguely authoritative--like maybe someone who isn’t me wrote it--but I soon discovered that I’m not sneaky enough to pull it off convincingly. So I decided to just make a list of things that are in the book:
Pictures
Words
Stories about things that happened to me
Stories about things that happened to other people because of me
Eight billion dollars*
Stories about dogs
The secret to eternal happiness*
*These are lies. Perhaps I have underestimated my sneakiness!

Have you read a better summary than that? Now, add these lumpy creatures that are humans and vivid and detailed creatures that are animals. Also, it's hilarious.  That's all I can say that's slightly coherent. Just trust me and stop everything you've ever done and read Hyperbole and a Half.

Thank you, Edelweiss, for giving me the amazing opportunity of reviewing this book, even though it took me months to actually gather my thoughts together.